The Grace of Eve

All too often Eve gets a bad rap. In the fall of man (as found in Genesis 3:1-13), God asks Adam what happened and Adam sells his wife down the river. “The woman you gave to be with me…” Total cop out. Epic fail. Complete weasel. He should have owned up to his mistake, which was staying silent when Satan spoke. When God turned to Eve, she could have justifiably slapped Adam silly. She had plenty of emotional fuel and just cause to go after him with both barrels. (Personally, I’d have gone for his eyes.) She could have at least started calling him a few choice names. Most people would definitely have told The Lord it was Adam’s fault for not stepping up when he was supposed to.

But Eve is gracious. Instead of getting justifiably huffy about the situation, she simply answers the question The Lord asked her. She points not to Adam, but to Satan. Given the opportunity to skewer her husband for throwing her under the bus, she chooses to show him grace instead. Adam deserved retribution. It WAS his responsibility first. What he got instead was a pass from his wife, who showed the fairer sex what the high road looks like.

Was it the right thing for her to do? What should she have done?  What would YOU have done? The 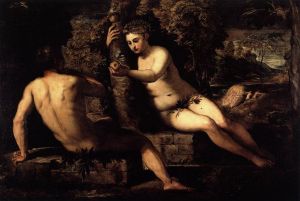 The Temptation of Adam by Tintoretto